Theology and mental health workshop prior to INPP 2012 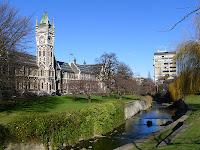 I spent the second day before the INPP conference at an associated workshop on theology and mental health organised by the Centre for Theology and Public Issues at the University of Otago. As one of today's speakers, Dr Richard Egan, pointed out there is a peculiar conflict between two growing intellectual trends in mental health care. On the one hand, a stress on the underlying biological science of psychiatry. On the other, a growing emphasis on the role of spirituality in mental health care. As he pointed out, the spirituality special interest group of the Royal College has 2,000 members.

Despite this, and despite being part of a Glasgow-based research group on transcultural psychiatry which has taken spirituality as an important thread, I have never known quite how to approach this tension. Lacking faith with a capital F, I have merely faith in the Enlightenment and hence some unease about forms of spirituality tied to religion and theology especially if one is encouraged to take supposed religious experiences at face value. (This leaves me the worry: to what extent can one not take a view on whether an apparent such experience is revelatory of theological facts? Why should psychitary be more relaxed on this than the Catholic Church, for example, for whom not every supposed experience is genuine?)

Given this, I was the wrong audience member for some of the papers which - quite reasonably, of course - concerned practical matters of how the Church should approach those either mentally ill or disabled. (Nor could I easily grasp the suggestion that mental disability is a divine blessing.) But two papers did leave me with more tractable thoughts.

Rev Dr Lynne Baab began by outlining the recent history of the bereavement exclusion from DSM IV and discussionabout it for DSM V. She bemoaned a failure to grasp the possibility of long standing non-pathological sadness giving the example of a colleague who had assumed he was ill when in fact he had suffered bereavement and both work and spiritual challenges.  Rejecting the appropriateness of medical care in such a case (though not in others)  Rev Dr  Baab went on to outline the possibilities of therapeutic resources drawing on the Christian tradition, including, eg., psalms of lament.

I wondered, and asked, about the relation of these two themes:  the rejection of the medicalisation of everyday suffering and the usefulness of religious resources in the face of suffering. Would it matter whether or not suffering were pathological for the relevance of spiritual resources? The parallel is wondering whether one needs to restrict pharmacology to pathological suffering if everyday healthy sadness is both unpleasant and might be eased? Her answer was helpful: what she really wished to resist was a whole mindset which did not value the positive possibilities of suffering. The Christian tradition to which she referred was not merely a reassurance, a kind of resource, but a better way of conceptualising the relation of flourishing and suffering. (In other words, medicalising everyday suffering and not seeing a religious response as relevant were two sides of the same coin.)

Andrew Bradstock dicussed the problem of suffering from OCD when one also has a religious faith.  Both Luther and Bunyan, for example, felt tempted to blaspheme in ways characteristic of OCD. (The latter was subject to 'floods of blasphemous thoughts' about whether the Koran might have just as great a merit as the Bible.) Such cases, far from uncommon, raise the question of how to distinguish conscious real thoughts (I think the phrase he used) from those attributable merely to an illness.

He pointed out that traditional approaches at cure may require sufferers to agree to their thoughts whilst resistingthe compulsions and this can seem irreligious to them. Such exercises are, though, to break the power of the compulsion. But awareness of that may be no help with religious guilt. In fact, reason, rather than training, may not bring relief to the sufferer. They may be told and in some sense accept that their thoughts are the result of an illness and thus not sinful but they may not be able to accept that thought - a second order thought after all - in the face of the ground level thought.

This left me wondering whether the issue of sin really changed the question of responsibility beyond, say, empirical or worldly legal matters? Or did it just change it as far as the sufferer is concerned? Prompted, Andrew suggested the latter but it seems to me that the nature of authorship relevant to sin might actually make a difference, at least against an assumption, briefly, that there really is such a possibility. (That is, that one can sin as opposed to merely thinking one can sin.) But that goes to heart of my general worry here: can we take a view of religion and mental illness which is neutral with respect to theology?
Posted by Tim Thornton at 04:34