Latest Association for the Advancement of Philosophy and Psychiatry bulletin 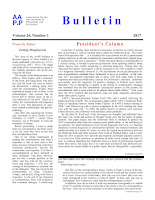 The latest edition of the Association for Advancement of Philosophy and Psychiatry newsletter from its secretary/editor and president James Phillips and Peter Zachar is now out.

It is a 56 page summary by the author, and set of commentaries from leading philosophers of psychiatry, on Peter's recent A Metaphysics of Psychopathology from MIT Press.

My own contribution (previously posted here) is included and Peter's response to it is one of his many responses. I will be keen to find out how he responded to my worry that in his attempt to police a boundary between what lay within and without experience, he said too much (by his own standards) about what lay outside it (again, on his own account). Curious also to find myself in the same camp as my colleague and friend Rachel Cooper.
Posted by Tim Thornton at 14:50

At the Hermeneutic Phenomenology Symposium at UCLan today 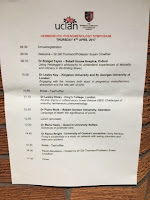 I was generously invited by my colleague Gill Thomson to sit at the back of a one day workshop on hermeneutic phenomenological social science at UCLan today. I have just listened to the first two talks, one (by Bridget Taylor) on sexuality and intimacy in couples with a dying partner and the other (Lesley Kay) on the views of childbirth in advance of experiencing it of expectant mothers. In both cases, the aim was to capture the thoughts and experiences of those concerned and hence both were clearly phenomenological, in the sense in which it applies to social science. Both were fascinating; the former was also rather moving.

Both were also phenomenological in a second sense. They actively drew on Heideggerian vocabulary and ideas explicitly in the analysis they offered. To take just one example, Bridget Taylor invoked Heidegger's discussion of technology as a particular attitude to the world, seeing it as offering resources in the form of 'standing reserve', in order to discuss the taking of Viagra. She suggested that light could be shed on the generally (in fact, entirely, in her study) negative views of it by participants by seeing it as involving a merely technological view of the body and the penis (seeing the body thus as merely a standing resource) in a way that undermined intimacy. Similar familiar notions such as being towards death, idle talk, the they etc were deployed in both sets of analysis.

It strikes me as interesting and quirky that Heidegger and a few other philosophers play this role of providing a vocabulary for social science analysis and the case for it this morning was that it seemed to work, in some cases, such as the viagra example, in quite striking ways. So it may be that the vocabulary receives a kind of justificatory support bottom up from such empirical work. But the vocabulary is obviously deployed top down. It is because Heiddegger wrote his essay 'On the question concerning technology' that that vocabulary became available and hence is now applied in social science.

And hence this suggests a question. Might there not be a tension between these two senses of 'phenomenology' in social science? That is, imposing a top down vocabulary from a dead German on the utterances of the living (most of whom will not have heard of him) might distort a neutral account of their take on the world, their experiences and thoughts. Wouldn't it be more phenomenological in the first sense to give up this vocabulary - unless that is that one's participants are Heideggerian philosophers - and simply to try to re-present the participants only in their own words? Replace Heidegger with the approach sketched by the Wittgenstenian philosopher Peter Winch?
Posted by Tim Thornton at 12:16