On McDowell's response to Travis' 'The silence of the senses'

McDowell responded to Travis’ ‘Silence of the senses’ in a lecture called ‘Are the senses silent?’ given at University College Dublin in 2013 [McDowell 2013]. Having set out the dilemma Travis poses to representationalist accounts of perceptual content, McDowell then highlights one of the stage-setting passages:

He takes issue (at 42.17mins) with just this point and claims that his own conception of the way that looks give the content of visual experiences is ruled out in Travis’ argument before the argument begins and hence that subsequent dilemma does not touch his own position.

McDowell argues that the ways things look in a visual experience just are ways the experience represents things as being. Travis rules this out because such looks could not be that by which an experience is recognizable as having the representational content that it does. But whilst McDowell agrees that it is necessary that a subject of a visual experience knows how the world is thus represented to her in experience, it does not follow that there is something – looks – by which a subject recognises the content. Knowing how one’s experiences represent the world to one need not be a matter of recognising this on some basis. For rational subjects, visual consciousness is self-consciously enjoyed and hence there is no need for something by which one recognises that the experience one has has the content it does.

He suggests a comparison with another aspect of the self-consciousness of rational subjects: being struck by a thought. It would be absurd to suggest, he argues, that there needs to be something by which one recognises what one is thinking. Even if one does, in some sense, think in words, one does not know what one is thinking by recognising or interpreting words spoken internally or externally. In general, there need be no basis for how one knows how representational consciousness represents things as being because it is self-consciously enjoyed. And hence Travis’ assumption that McDowell must account for the recognition of perceptual content by stressing visual looks is false, undermining the dilemma he goes on to pose to McDowell.

This looks to be powerful objection to Travis. It seems as though Travis has illicitly built in a requirement for a substantive epistemology for the content of perceptual experiences that is in fact unnecessary. But it is worth following through McDowell’s analogy with being struck by a thought. For philosophers who reject the idea that there must be an internal vehicle for the content of thought (ie.philosophers who reject ‘representationalism’ as that word applies to the philosophy of thought more broadly, the representationalism, for example, of Jerry Fodor’s language of thought) the idea that there needs to be an informative account of how one’s own thoughts can be recognised will seem mistaken, in part for the Wittgensteinian reasons discussed in chapter 1 [Fodor 2008]. An implication of this is that there need be no informative account of self-knowledge of auto-representation, in Travis’ word. But, staying with the analogy, is there an equivalent for perceptual content, which is distinct from autorepresentation, for the case of being struck by a thought? One possibility is the kind of idea, possibly shameful, that strikes and is immediately disavowed. The sudden thought that if one murdered one’s parents, one might inherit their money, for example. Such a case might be akin to seeing a perceptual illusion, such as a disguised form of Müller Lyer lines, but on recognising its underlying form, rejecting the conclusion that one line is actually longer than the other. But aside from such a case, there does not seem to be conceptual space for something thought-like but not thought.

Returning to the perceptual case, could the idea of being suddenly struck by a possibly bad idea help? The problem is that the supposed analogue – the spontaneous but then rejected thought – is still in the realm of auto-representation. McDowell needs some account of perceptual experience which does not collapse back into autorepresentation. Travis’ anti-representational account accepts autorepresentation, or perceptual judgement, made on the basis of an observational encounter with extra-conceptual objects. To add to that, to distinguish his account of perceptual experience from Travis’ more austere account, McDowell needs some way to substantiate the idea that there is content to perceptual experience itself. If he rejects Travis’ suggestion of looks-indexing, what other way is there to argue that perception involves a conceptual content aside from the content of perceptual judgements made in response to seeing things? Although McDowell’s rejection of Travis’ stage-setting looks to free McDowell in one bound from the trap ‘The silence of the senses’ sets, it is not clear what conceptual space that leaves for McDowell to articulate an account of passive perceptual content distinct from that of active perceptual judgement.

McDowell on action and intention #2


This section and the one before have outlined McDowell’s account of action which draws heavily on Anscombe’s neo-Aristotelian account in Intention and O’Shaughnessy’s dual aspect account of the will, extended by McDowell to cover the case of intentional action. The result is a picture of action and intention in action as conceptual through and through and thus offering a close parallel with the account of perceptual experience set out in Mind and World. In the final section of this chapter I will assess the charge that both aspects threaten to introduce a detached distance between the world, both perceived and acted within, and rational human subjects.
Posted by Tim Thornton at 12:03

McDowell on action and intention #1 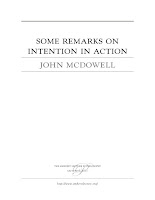 
But this connection to Anscombe and Thompson can be taken the other way. Without the assumption that mental particulars are states of inner space, a view McDowell has done much to undermine (see chapters 1 and 4 in particular), there is no intrinsic danger in speaking of the nature of intentions as a species of continuant, a process described under a rational aspect, resisting any temptation then to think of this as a mental state. Characterising them further, however, requires looking in more detail at the kind of reasoning involved in forming prior intentions and in intentional action.
Posted by Tim Thornton at 11:40

Dreyfus vs McDowell on skilled coping and the myth of the (pervasiveness of the) mental.