At the limits of shared intelligibility: delusions and non-doxasticism

At the limits of shared intelligibility: delusions and non-doxasticism.

An abstract for a proposed talk (offered to the Philosophers Rally, Nijmegan, Netherlands, April 2014)

Delusions present a challenge to the attractive assumption that shared intelligibility is the mark of the mental since, according to Karl Jaspers, primary delusions are un-understandable. This has motivated a philosophical project to ‘solve simultaneously for understanding and utter strangeness’ in Naomi Eilan’s useful metaphor. That is, to provide a degree of understanding rather than mere explanation of the content of delusions whilst preserving their prima facie strangeness. In this presentation I will consider the merits of a recent approach: non-doxasticism. It takes seriously the disanalogies between delusions and normal belief-like states to argue that delusions are better understood to be some different kind of intentional state. I will argue, however, that on either of two broad versions of non-doxasticism, this approach cannot help with Eilan’s challenge and will draw some general conclusions about that challenge.

A familiar problem for delusion takes the form of an argument:
This is much too fast but has echoes which go back to Jaspers and the apparent tension in his stress on empathic access as the heart of psychological understanding – suggesting that understandability is the mark of the mental – with his definition of primary delusions through un-understandability. In the face of it one might deny the first premiss but the danger here is that one thus gives up the project of shedding light on what marks out a state as a mental state. To avoid that, one would need to replace appeal to the Constitutive Ideal of Rationality with something.

A more modest response is to question the second premiss. Construed as world-answerable states, delusions appear to violate the Constitutive Ideal of Rationality. But not all mental states are bound by that Ideal in the same way. And hence if one construes delusions as some other kind of state, one can deny premiss 2 and hence avoid the conclusion. This is the more familiar recent version of non-doxasticism.
Perhaps delusions are, or have elements of, acts of imagination? I do not think, however, of three interesting and potentially promising versions of this approach that they can work.

But there is a different way of thinking about non-doxasticism. This is not so much to think of delusions as within the conceptual map of intentional states, though not the beliefs, but rather to think of them as pushing the idea intentional states to the limit. One further preliminary point: delusions may not press the limits of shared intelligibility in the same way.
Posted by Tim Thornton at 21:56 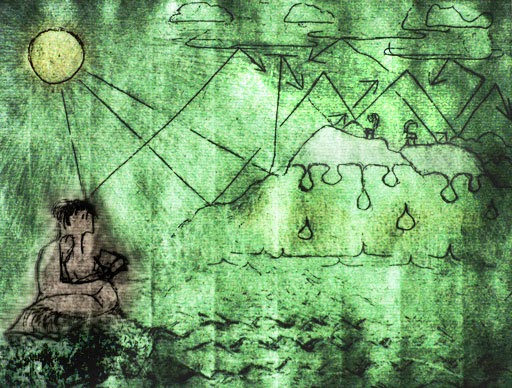 In a conversation this week over a coffee at Tiggis restaurant with one of my many line managers, Karen Wright, and her other minions (colleagues!) from my School’s mental health teaching division, I found myself mulling over the nature of ‘nursing knowledge’: the knowledge that underpins (good) nursing. Issues we discussed included whether such knowledge forms a natural kind, whether it is distinct from other forms ie. it is sui generis, and whether it is better thought of as a science or art (depicted*, sort of). I don’t think that my own train of thought was particularly compelling but here it is.

First, consider the contrast between those roles or disciplines whose related expertise or knowledge defines the role or discipline and those where the relationship is the other way round. One might think that neurology or physics or mathematics belongs to the former category. What unifies the role or discipline of practitioners is the nature of the knowledge in question. (I must admit to some scepticism about this side of the contrast: that the subject of mathematics, for example, individuates itself, comprises a natural kind, independently of the toil of self-identified mathematicians. I can imagine a need for a sociology of mathematics to explain why branches of reasoning, such as Newtonian fluxions, were counted as properly mathematical. But despite this, it might help demonstrate a scale if not a distinction.)

The distinction is, at least, supported by what seems to be related. Where the knowledge is prior to the role it is more likely to be sui generis. In this case, our understanding of the subject matter of mathematics is not settled elsewhere than by the work carried out by mathematicians. It seems plausible to think that where that is the case, the subject matter of the relevant knowledge can be used to define the role or discipline, rather than the other way round.

On the other side of the distinction, there might be roles such as restaurant proprietorship for which what is known, or needs to be known, is not intrinsically unified. The role gathers together diverse areas of subsidiary knowledge as the knowledge proper to restaurant proprietorship. This might include some of what is involved in cookery, customer relations, tax law etc. To identify restaurant-proprietorship-knowledge, one needs to identity first the role and only then whatever is the knowledge that turns out to be necessary to carry it out successfully. Further, the knowledge so needed isn’t sui generis to this role. It involves the right mix of what is known in other roles by chefs, social psychologists and moral agents, and tax lawyers.

Given that rough contrast of the order of determination of professional role and underpinning knowledge, I think that nursing lies in the second  camp. First, one identifies the role – in this case centrally via the caring for patients and health service users, though that would need to be articulated – and only then the knowledge necessary for that. Further, addressing the issue of whether it is sui generis, what is known is the right mix of knowledge taken from other disciplines. The argument for this is empirical: a casual glance at the diversity of the nursing curriculum.

Art or science? A first informal answer to that, again looking at the mix of modules in a nursing undergraduate degree, is both. The sciences of physiology and patho-physiology rub shoulders with communication skills, law and values based practice. But there’s a more interesting answer which starts from the challenge raised by the order of determination and rejection of the idea that nursing knowledge might be a sui generis natural kind: how does one select, from the range of other disciplines, which to draw on when?

Suppose that what one means by scientific knowledge (in the specific context of the contrast of science and art: this would not get one through a philosophy of science module!) is what can be deductively codified in a general major premiss and a situation specific minor premiss of a syllogism. (One might mean something like this especially if one has been reading Kant’s Critique of Judgement.) The regress implicit in the frame problem in AI suggests that the selection problem nursing faces cannot be solved by the exercise of science so understood. It requires the exercise of judgement which seeks, rather than presupposes, an appropriate major premiss. It is thus what Kant would call a reflective rather than determinate judgement. And thus, still following Kant, it is an art not a science. So the knowledge at the heart of nursing, the knowledge to select the right subsidiary knowledge called for by particular patients in particular situations, is an art not a science.

(*Picture from the very excellent: http://www.waxoil.com/)
Posted by Tim Thornton at 09:27

I have never understood why Dasein, that being for whom being (I want to write: Being) is an issue, should be essentially orientated towards death. I can see how, for being/Being in general, or the fact of one’s own being, to be an issue, one might need to have a conception of not being. And so it might seem that the way that comes about is via an orientation towards, or awareness of the possibility of, one’s own death. But I don’t see why that should be necessary. Why couldn’t the possibility that one might not have existed be enough, for example? Perhaps an orientation towards one’s contingent birth?

I mention this in the context of a health scare this year which – rationally I think – made me at least take seriously the more than merely abstract possibility of ceasing to be: the sense of not having a future. Hence a quick thought on that.

Bill Fulford has taught me the use of a thought experiment or class exercise to illustrate the diversity of values in values based practice beyond moral values. It turns on this scenario:

You have an illness which will prove fatal in n weeks/months/years.
There is a potential treatment which has a 50% complete success rate and a 50% instant fatality rate but you must take it today.
Question: for what value of n would you prefer to risk the treatment?

Typically this question prompts a wide range of student answers from months to nearly a normal expected full life term. At one extreme, a young trainee medical student at Warwick University preferred the fixed fatality over the 50:50 life or death providing that n was, merely, at least a week or two. That is, for a value of n as small as two weeks, he preferred that small fixed life to the 50% chance of dying that day. When questioned, he replied that he would want to put his affairs in order and that would be possible in a couple of weeks and so even a fortnight was to be preferred to the potential treatment which might rule out any time for sorting things out.

But this student’s sang-froid was way beyond my own resources of character this year. With the normal (perhaps presumptuous, given the standing possibilities of being knocked off one’s bike) confidence in some sort of future undermined, I found that I wanted to take to my bed or pour a stiff drink, not as positive project of enjoying the sleep or the drink but merely as an escape. With the prospect that the future might not exist simply made more than normally concrete, the practices that constitute a life seemed unavailable to me.

So whilst I don’t get the idea of being towards death as a fundamental existential dimension, an orientation towards an open future does seem an essential feature of my kind of non-morally-serious existence.
Posted by Tim Thornton at 17:08