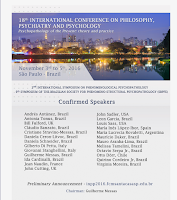 Here is a link to this year's International Conference on Philosophy, Psychiatry and Psychology. Its theme/ title is Psychopathology of the Present: theory and practice.

Another conference announcement, this time sent by Robert Chapman at Essex. The website is here.

We are pleased to announce that the theme for this year's Essex International Graduate Conference in Philosophy will be 'Madness, Disorder and Society'. The conference seeks to bring together different philosophical perspectives on madness and disorder, especially when considered in their social contexts. It will be held on 7 May 2016, and keynote addresses will be given by Derek Bolton (Kings College London) and Lorna Finlayson (University of Essex).
Location: University of Essex, Colchester
Date: 7 May 2016

The mad have always challenged society. Beginning in the 1960s, however, the anti-psychiatry movement began to systematically confront psychiatric institutions and their wider social contexts by raising what were essentially philosophical questions. This movement challenged the validity of psychiatric diagnosis, the purported boundaries between the sane and the insane, and the very idea of mental illness.
In turn, psychiatry hit back, adopting a biomedical, evidence-based approach and an ever-increasing standardisation of psychiatric classifications. This has given rise to a new paradigm regarding how we understand the mad and the disordered, and today there are now more psychiatric classifications than ever before.
Nonetheless, in more recent years the neurodiversity movement has called for a full affirmation of a wide array of natural variance in human functioning. This more radical move challenges deeper assumptions regarding both what it means to be human, and in turn to function or flourish as such, in a way that may undermine even the biomedical approach designed to avoid these very issues.
From a more top-down perspective, further questions arise. Most notably, if we are mistaken in some way, about the pathological status of the mad and disordered, this further calls into question the status of those considered normal. From Nietzsche to critical theory, thinkers have suggested that it may in fact be that society is sick, and that at least some of those who fall outside its norms may have good reason to do so.
Lastly, on the ground level, an ever-increasing number of dangerous designer drugs and bizarre therapies are now produced and sold in order to restore those on the outskirts back to the realm of normalcy. This raises yet further ethical questions regarding both the treatment of those considered mad or disordered, and in turn the institutions that profit from them.
We seek high quality abstracts (200-500 words) which speak to the conference themes. Topics could include, but are not limited to:
We will accept papers from current or recently completed graduate students working in philosophy. Interdisciplinary work is encouraged, although theses must, ultimately, be of a philosophical nature. Abstracts and questions should be sent topygradc@essex.ac.uk by 12:00pm on 10 February 2016.
Location and accessibility
The conference takes place at our University's Colchester Campus. Colchester is an hour away from London by train.
Deadline for applications: 12.00pm, 10 February 2016
Contact: pygradc@essex.ac.uk

Conference - Does the philosophy of psychiatry need a metaphysics? 3rd June, University of Lancaster

Here is notice from Dr Rachel Cooper of a conference at the University of Lancaster and also, for those in the neighbourhood, a preliminary reading group.

Conference - Does the philosophy of psychiatry need a metaphysics? 3rd June

Much recent work in the philosophy of psychiatry has presupposed some metaphysical framework or other (eg pragmatism, realism, a McDowellian or Wittgensteinian approach). This conference brings together the authors of a number of influential recent books to consider the extent to which work in the philosophy of psychiatry requires the assumption of a metaphysical framework. Speakers will speak from Wittgensteinian, McDowellian, Realist and Pragmatist perspectives. The following speakers have agreed to participate:

The aim of the conference is to consider whether the key claims of each writer could have been made without the controversial metaphysical assumptions that they in fact employ.
Work in the philosophy of psychiatry is perhaps marked more by metaphysical disagreements than is work in the philosophy of many other special sciences. However, similar issues have also arisen in other areas. Professor John O’Neill (Manchester) will act as a commentator and speak about the ways in which disagreements regarding basic metaphysics have impacted on the areas in which they work (environmental philosophy).

The associated reading group will read the books that will be discussed (having read the books won’t be essential for understanding the conference, but will make it better). To get through the books we need to get going! This term we will be reading Peter Zachar’s book A Metaphysics of Psychopathology, and Tim Thornton’s book Essential Philosophy of Psychiatry. We’ll meet on Fridays at 3pm in County South B35 (starting 15th Jan). For Friday 15th Jan we’ll be reading the introduction, and Ch 1 and Ch 2 of Zachar’s book. (you can get these chapters from Google books)