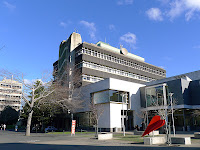 Arai te Uru Marae Thursday 5 July Pöwhiri – welcome ceremony/ritual of encounter A Pōwhiri encapsulates the formal welcome ceremony onto the marae (traditional meeting place), starting with the initial karanga (call) from the tangata whenua (people of the land, the hosts) right up to the sharing of kai. This process also removes the tapu (sacredness) from the manuhiri (visitors), who are referred to as waewae tapu (literally, sacred feet) if they are first-time visitors to that particular marae.

This marae’s kawa is that shoes are removed before entering the wharenui (meeting house) and they would be removed outside the door. Whaikōrero or formal speech making follows the karanga.    A waiata or song is sung after each whaikōrero by the group the orator represents. Koha – a gift, generally an envelope of money, is laid on the ground by the last speaker for the manuhiri (visitors). A local kuia (female elder) may karanga as an expression of thanks. A male from the tangata whenua will pick up the koha.

Whaikōrero or formal speech making follows the karanga.    A waiata or song is sung after each whaikōrero by the group the orator represents. Koha – a gift, generally an envelope of money, is laid on the ground by the last speaker for the manuhiri (visitors). A local kuia (female elder) may karanga as an expression of thanks. A male from the tangata whenua will pick up the koha.

Hongi – the pressing of noses signifies the joining together of tangata whenua and manuhiri. Tangata whenua invite the manuhiri to come forward to shake hands (hariru) and hongi. Hākari – the feast, a meal is then shared. This usually signifies the end of the pōwhiri.

Thus we took a bus to what I learnt as an unusually urban version of a marae to wait in the carpark until called by song to enter a building, women first. There then followed a set of apparently challenging ritual greetings in, obviously enough, a foreign, to me, tongue and thereafter, in English, friendly greetings and tea. I think that this says more about my own inadequacies than the nature of the encounter but I found the experience strangely disturbing. Whilst I could be sure that no harm would come to me, the otherness of the challenging encounter couldn't be entirely eased by such rational reassurance. Still, all this, coupled with a helpful later explanation of what had gone on by Prof Sir Mason Durie, was rather helpful for my own plenary lecture when we returned to the University. Prof Durie's account traded on exactly the kind of normative notions of what was the right thing to do that I sought to extract from Wittgenstein's discussion of Frazer.

Since I am writing this before the public lecture a the end of the day, I can't comment on that yet. But one thing did strike me from another fine joint presentation by a group of ex Kings students. The final paper, partly prepared by the absent Natalie Banner, considered various competing definitions of mental disorder up to and including the draft DSM V. It took homosexuality as a litmus test. On the assumption that it is not a disorder, do the various definitions successfully manage to exclude it? If not, so much the worse for them.

In the discussion that followed, one thing began to strike me. It would be possible to take the inference the other way. (One person's modus ponens is another's modus tollens.) If the DSM V definition implies that homosexuality is a disorder, one might conclude, instead, that the definition is fine and that homosexuality is, indeed, a disorder. In the face of such a response, what are the options for replying?

One might attempt to appeal to some grounding facts about the real status of homosexuality to apply pressure back, again, the other way, against the definition of disorder. That would accord with the history of trying to offer a correct or true account of the nature of disorder, for example, of whether it is purely factual or partly evaluative. The analysis itself aims at factual correctness. But it isn't clear what those grounding facts might be in the context in which the nature of disorder in general is up for grabs. The way the discussion after the paper in fact seemed to go was that it was better, more desirable, to take homosexuality to be the litmus test it had been assumed to be. In other words, the status of analysis of disorder was a matter of value, not fact: analysis aimed at what was good, not what was true.
Posted by Tim Thornton at 07:58