At the Wittgenstein workshop prior to INPP 2012 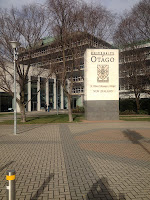 I am at the University of Otago in advance of the INPP 2012 conference for, today, a Wittgenstein workshop and then, tomorrow, a number of parallel pre-conference to which I aim to go to a session on psychiatry and theology chaired by Andrew Bradstock (whose wedding was, by the way, scarily, the most intellectually satisfactory I have been to).

A couple of points stand out  for me from today.

No supposition seems to me more natural than that there is no process in the brain correlated with or associated with thinking; so that it would be impossible to read off thought-processes from brain­processes. I mean this: if I talk or write there is, I assume, a system of impulses going out from my brain and correlated with my spoken or written thoughts. But why should the system continue further in the direction of the centre? Why should this order not proceed, so to speak, out of chaos?
The case would be like the following­-certain kinds of plants multiply by seed , so that a seed always produces a plant of the same kind as that from which it was produced--but nothing in the seed corresponds to the plant which comes from it; so that it is impossible to infer the properties or structure of the plant from those of the seed that it comes out of--this can only be done from the history of the seed . So an organism might come into being even out of something quite amorphous, as it were causelessly; and there is no reason why this should not really hold for our thoughts, and hence for our talking and writing. [Wittgenstein 1981 §608 ]

To make this seem less bizarre, SR offered an analogy with the determining of the gender of crocadiles in part by temperature, as well as two more mental examples: the complex explanation of the forming of a view and the case of knowing the way to a shop. I have to say that I thought his domestication did not go far enough.  After all, paragraph 608 says that 'nothing in the seed corresponds to the plant which comes from it; so that it is impossible to infer the properties or structure of the plant from those of the seed that it comes out of'. But the fact that the gender of a crocadile depends on temperature as well as genetic material does not imply that nothing can be inferred about the outcome from the identification of the genetic material. Crocadile DNA is not by any stretch amorphous. To think so is to slight the efforts of those who try to determine its sequence.

It has always seemed to me that Wittgenstein rejects a notion of a readable isomorphic structure at the physiological level by invoking something much stronger: a lack of a contribution to causal determining by microstructure. Seed behaviour supervenes only on history not microstructure. But that seems, in the twenty first century, deeply implausible. (By contrast, it does seem plausible to me  - as an antireductionist about content  - that mental content, or representational notions, apply only at the level of whole people. That those notions find no echo lower down.) The most plausible interpretation seems to me that this is a comment on the concept of causation. It is not just the concept, the concept of causation alone, that makes the seed case seem so weird but, perhaps, deep seated but further empirical assumptions.

Derek Bolton discussed On Certainty which explicitly discusses mental disturbance, which is unusual for philosophy. With respect to Moore's claims to certainty, Wittgenstein suggests that the nature of the certainty would have to be a kind of logical matter. It is not so much that the judgements could be wrong but that if they are, there is something wrong with the judger. Getting the judgements wrong is a sign of madness or mental disturbance or dementia. So if this is also a matter of logic, then this is because man is the measure of things. So the measure has to be in order.

Derek further stressed the thought that, from LW's examples, the things one can be sure of are propositions which track personal history. Wittgenstein lists some of them in that way, after all. But for a complete enumeration, there would have to be personal lists for everyone (and I wonder how the person could be picked out in the case of knowing one's own name: I know that my name is TT.) Further, much of one's past can be forgotten so not everything personal is a candidate for certainty. In other words, there are no common characteristics but that the personal is a helpful clue.

But Derek did not draw the conclusion I think he ought to. Given that an utterance which might be expressive of a Moore proposition in one context (if Moyal Sharrock will forgive me to give them as much content as that) can be a perfectly sound empirical claim in another, context seems to me to be all. So combined with the man as measure as all things idea, this seems to give a thoroughly contextual notion of what should count as a delusion (in the sense of failures of appropriate certainty) or not. One consequnce would be that there is no possibility of a DSM style definition of those judgements which those subjects of sound mind should agree to and hence which it might count as pathological not to agree to. But additionally, it offers no succour to the project of articulating the content of such failed utterances. By contrast the stress of merely personal certainties does seem to allow that (for a reason I will return to in a moment).

Derek Bolton suggested a different line of thought in answer to my worry: In Pensilvania, to think one has been abducted by aliens is not to be mad because one's actions need not suffer. This points to failures of action as the key ground of pathology. A surprising echo of Bill Fulford's famous Simon case. I also think this a mistake. If one's actions turn out to be sound despite any such view - though 'view' must be the wrong word here - this is surely an accident. They, the actions, will not express knowledge of how to negotiate the world (in fact even in  Pensilvania there is no danger of alien abduction and thus no need for any ordinary life impeding precautions against it). So, unlike both my seniors, I think the key thing is the intellectual failing not its happy or otherwise practical outcomes. They are mere signs.

Taking a second stab at my worry, I suggested that the reason he should give up his personal list is Williams' plausible diagnosis that a particular philosophical assumption about the shape of knowledge, epistemological realism, is the necessary route to Cartesian scepticism. With that thought in mind, the personal nature of some Moore propositions is a distorting red herring. Others, after all, are thoroughly socially mediated via testimony. Aside from that obvious omission, one worry with Bolton's picture was that it undermined Wittgenstein's anti-sceptical thrust by conceding too much to Descartes. The danger is that by so doing, 'mad' certainties become merely different judgements if they concern anything beyond the personal. They are coherent in principle even if not coherent for us.

In reply, Bolton reminded me of Descartes' own suggestion that some forms of error would amount to madness and then, a bit surprisingly, suggested that was akin to a dreaming scenario. (It would be surprising because it is not clear how it could serve as a coherent ringer. If I were dreaming, all would still seem the same to me. If I were mad, surely not. Cf the lack of a sceptical ringer for mathematical beliefs.) But I think that that was not Bolton's own view: he agreed with Wittgenstein's picture seen as, in effect, an outline of conditions of possibility of judgement which were not met in the case of such, at least, madness. If so, though, the personal list is not the most helpful aspect of what is an unedited collection and best politely ignored rather than stressed as an insight.

Having concentrated on the first two papers, my jet lag caught up with me during Grant Gillett's therapeutic approach to disorders of the will. But at great risk of traducing him, I think it concerned both the danger of thinking that brain imaging results can somehow preempt conceptual questions about what is and isn't OCD, eg., and also the distorting effect of over emphasis on a set of metaphors which, when treated more lightly, can still be helpful.