The bare presence of artistic intention 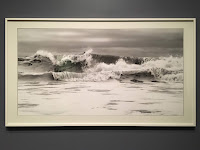 The chance juxtaposition of two art galleries next door in Denver: the remarkably fine Clifford Still gallery and the modern art gallery showing an exhibition of landscape photography, forced me again to rethink photography.

So the Clifford Still gallery is a testament to the artist’s confidence in his own importance and, strangely, I came away thinking he was probably right. The confidence lay in his reluctance to sell his own work and his resistance to being included in exhibitions merely as one among many. His view was that only in single artist exhibitions was there a way to understand the art, the unifying vision etc. And hence in a strange description of his working practice on one of the gallery walls was, as a final step, that the work was rolled up for storage. Not packed off to a gallery or a private buyer. But hence there was an enormous body of work ready to be presented to any city willing to establish a gallery devoted solely to him (hence Denver).

More substantially, however, was the gallery’s case for his key role in the establishment of a distinctive form of American Abstract Expressionism. Helpful placing showed the gradual removal of realism while retaining increasingly abstract elements originally derived from, say, the human form or the sun or moon. For my point here, the key leitmotif was that everything was deliberate. Clifford Still knew what he was doing.

After a beer and now in the landscape photography exhibition of the adjacent gallery and I was baffled as to what game was being played. In one series of pictures, landscape photographs had been developed onto material (lace and burlap) and then buried in then ground for some months to decay and the results displayed. In another, radioactive soil from Fukuyama had been placed on photographic paper. In a third, ancient photographic paper had been dipped in developer in such a way as to give an impression of hills. None of this began to engage me but what seemed more embarrassing was that I seized on a large photograph of a breaking wave, frozen in time, as having something worth staying for. How mortifying to be entranced by something apparently simple in conception even if hugely difficult to achieve: photographic realism.

Roger Scruton (not a philosopher I ever otherwise cite) argues that photography isn’t art because it is not true that the reason for the presence of elements in a photograph is primarily dictated by the photographer’s intention. Elements in the picture are there primarily because they were there in the scene photographed. Hence the only art, according to Scruton, is the art of theatre in arranging or selecting the tableau to be pictured. My qualm about the experimental use of photographic material and methods seemed to be not that this freed the artists from Scruton’s criticism by injecting non-realist intention. Rather, it threw away the guidance of any vision in the process. The ethos seemed instead to be a random experiment to see what happened when, for example, photographs were buried in the ground. But who cares? The result seems to render pointless any attempt to think through the pictures akin to how I’d react if I knew the poem on a lecturer’s board simply replicated Stanley Fish’s famous aesthetic experiment.

It turns out that I cannot escape the lure of a kind of Myth of Presence, in this case, of the artist’s intention. It seems I am reassured to know that there’s something going on for a reason. I feel somewhat ashamed of this but there it is. How very pre-post-modern.
Posted by Tim Thornton at 00:17