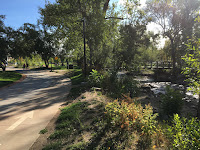 I’ve never understood why but, while on holiday, I’m often drawn to thinking about how it would be possible to make the rest of my life rather better: to achieve a ‘life-style upgrade’. This is such a trope of holiday thinking that it’s hard to unpack it, to think about its conditions of possibility. But I think I can see one element this time.

There has never been much point in life-style upgrade thinking while, say, backpacking. Then, I just want to stop having to carry the rucksack or to sleep on the ground. Or, while in particularly stifling 40C temperatures in Thailand, I told Lois, crossly, that, if I ever said I had enjoyed that trip, she should remind me of how, exactly, I’d felt in *this* moment. Life-style upgrade as mere return to ordinary comfort.

So the trope attaches to a particular kind of holiday. And today it seems obvious. I holiday as an attempt to realise the Platonic ideal of an enjoyable life, which is merely poorly approached in the rest of my life. That’s the reason why a holiday might be thought - perhaps mistakenly - to speak to ordinary dwelling. It’s the reason why the holiday experience might seem so much as relevant to anything more general but also why it might have a kind of jurisdiction over the everyday, as opposed to being an irrelevant excursion from Kansas.

So here I am in Boulder, Colorado, to maximise: hiking up mountains, morning jogs along the creek, off-road running, the charms of a university city, good coffee, a ridiculous concentration of micro breweries. And in this milieu, it seems reasonable to ask: what of this should I take back to Blighty?

This thought, though, helps to clarify something about how such a thought even makes sense. I’m comparing the holiday lifestyle with the domestic. One might say that my home town Kendal is a partial and poor exemplification of the Platonic ideal that is - or is not so much beyond - Boulder. The norm of lifestyle assessment is the same: here and there. Both are towns just outside the mountains. Both have growing coffee, beer, artsy culture. It’s just that Boulder is rather better at it at the moment. But this helps rationalise something closer to home.

Kendal’s biggest recent political dispute has been the removal of long-standing informal free parking on a scruffy bit of land by the river and its replacement with an extra bit of green grass and the joining up of a cycle lane. Those supporting the retention of the carpark forced a ballot and, fearing that they would be organised and others would not be, I emailed local friends to tell them about it, simply assuming everyone would share my views on losing the ugly carpark and establishing the cycle path. Fortunately for me, the ballot proposers lost badly. But one of my friends expressed thanks afterwards for the reminder saying that had she been around at the time she would have loved to vote because it had been such a useful carpark. I replied with some practical alternatives but I realised that I could not guarantee that she would never suffer occasionally having to pay to park in Kendal.

I realised, however, that this bit of rational friction gave me an insight I’d failed to have. I wasn’t voting on practicalities at all. Rather, I was voting as a piece of groundless aspiration. I don’t know how inconvenient even for me the loss of a car park will be, nor how helpful a bit of extra cycle path might be, especially given that truly local Kendalians, as opposed to offcomers, have not really taken to cycling. The existing cycle paths are embarrassingly empty. But my correspondent was making a judgement that would seem right for any other North Western post-industrial town. One might dispute the value of carparks over parks and vote practically for a ‘really useful’ carpark. Whereas, whatever the practical utility, I want my adopted hometown to approach a Platonic ideal of a good place to live. I want it to be a Boulder while my correspondent assumes (not falsely) that it’s more of a Burnley.
Posted by Tim Thornton at 17:08