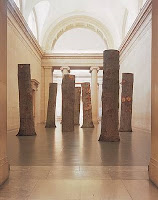 I’ve spent a couple of days at home largely ‘off com’ writing the first draft of a paper for the Journal of Evaluation in Clinical Practice, invited by Michael Loughlin at MMU for a special issue on the input philosophy can make. After 36 hours work, the draft is, of course, very rough. (Later: The finished paper is here.)

What struck me was that some recent ethnographic research (by Smith, Pope, Goodwin and Mort) on the nature of expertise in anaesthesia suggested that a number of related but different aspects. These ranged from manual dexterity in manipulating tubes or just adding or removing a pillow, to the more complex task of integrating readings from a number of instruments to judgements about when to override general EBM style guidelines. The authors emphasise the importance of situation-specific knowledge but complain that it is too often neglected because of a prejudice about the relative importance of ‘technical rationality’:

a model of professional activity as problem solving which is made ‘rigorous’ by the application of scientific theory and technique. The dominance of technical rationality leaves practitioners unable to account for those aspects of practice that lie outside this model. [Smith et al 2003: 319]

Now one way to try to underpin the importance of the tacit dimension would be to appeal to Dreyfus’ claims about its priority over explicit, thematic understanding: ‘all thematic intentionality must take place on a background of transparent coping’ [Dreyfus 1991: 85]. But Dreyfus account contains a restrictive model of coping. For one thing:

So the background of skilled coping is neither propositionally nor conceptually structured. It is mindless. And this suggests that if applied to medical expertise, such expertise would be essentially bifurcated: mindless coping on the one hand and conceptually structured thematic and minded understanding on the other. Given their interplay, that seems an implausible story.

(At this point, one might look to discussion of the non-propositional account of Wittgenstein’s hinges from a few weeks ago. I have not yet had time to think about that yet.)

But instead, one can connect into the McDowell-Dreyfus discussion from Inquiry. That’s what I’ve done so far. There’s no reason why clinical judgement shouldn’t be a conceptual capacity with both practical and discursive (and hence fully propositionally structured) outputs.

Whether the referees, let alone the readers, of the Journal of Evaluation in Clinical Practice will find this a helpful articulation of the nature of tacit knowledge that forms a part of clinical judgement remains to be see.

I had the same problem, however, with Dreyfus’ What Computers Still Can’t Do. I found it very hard to find the argument against an AI inspired account of human intelligence. In particular I couldn’t find the argument based on rules and, even more particularly, on the regress of rules. It isn’t helped by the fact that ‘regress’ isn’t in the index.

There seem to be several versions of something like the argument. But in each case I had the feeling that this isn’t the real presentation of the argument: just a reminder. And thus it does not have to be explicit. But, as far as I could find, there isn’t a definitive version. Very annoying.
Posted by Tim Thornton at 13:52