The value of what's local #2 and NIMBY-ism 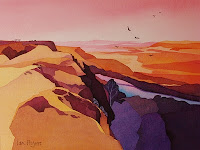 My parents kindly bought Lois and me a painting of Scout Scar by Ian Fryers to mark an anniversary. I’d seen a photograph (above) of the painting on the web when looking for a photo of Scout Scar and realised I’d like to own it / an instance of it.

Now I could offer some sort of general reasons for liking it starting with its balance of realism and abstraction, the way its form appears to be normatively determined whilst its content is playfully not so, and so on. But fairly soon I’d be faced with something which is not at all general but specific.

It’s also a picture of a place whose own aesthetic value I could also begin to sketch in general terms perhaps through the contrast of its humble stumbly rocky blobbiness with the majestic views it gives of the shapely central fells a dozen miles away, like an aged, bowed retainer waiting on his employers at a modest remove. But again, such general reasons would soon give way to something specific.

That is: it’s local to me. And the picture, whatever its general merits, depicts where I escape to to run whenever I can. It is this which really underpins my particular interest in both the place and the picture. Whatever the general reasons available, my own reasons are quite specific. However, when Wilhelm Windelband says:

[E]very interest and judgment, every ascription of human value is based upon the singular and the unique… Every dynamic and authentic human value judgment is dependent upon the uniqueness of its object.

and then goes on to say:

Is it not an unbearable idea that yet another identical exemplar of a beloved or admired person exists? Is it not terrifying and inconceivable that we might have a second exemplar in reality with our own individual peculiarities? This is the source of horror and mystery in the idea of the Doppelganger. [Windelband 1980: 181-2]

it seems to me that he is missing the point. I would find it spooky but delightful to find a twin-Scout Scar somewhere in New Zealand. (I would, rather more mundanely, be interested even to find a copy of Thornton Towers elsewhere in Kendal: it seems that my very generic modern house is, by chance, unique.) The relevant idea is not the uniqueness of not being copied but rather the singularity of the individual, copied or not.

Given the naturalness of such an attachment, it thus seems unreasonable to criticise NIMBY-ism. We cannot help forming attachments to the local and particular. My own NIMBY-ism includes sadness that Cubbington Woods some 150 miles away will be completely destroyed for the high speed rail link HS2. I don’t live nearby any more and would probably never walk through them again, anyway. I suspect that there are other equally pretty woods with no less aesthetic value. But Cubbington Woods are part of what has been particular and local to me and it would be odd if that specific knowledge did not affect my judgement.